Who doesn’t like reflecting back on the good ol’ days?  Days when  pieces of Jadeite and other types of Depression glass were often given away with everything from oatmeal, to flour sacks, to cans of coffee. 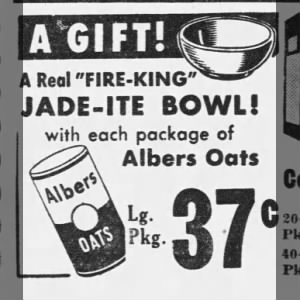 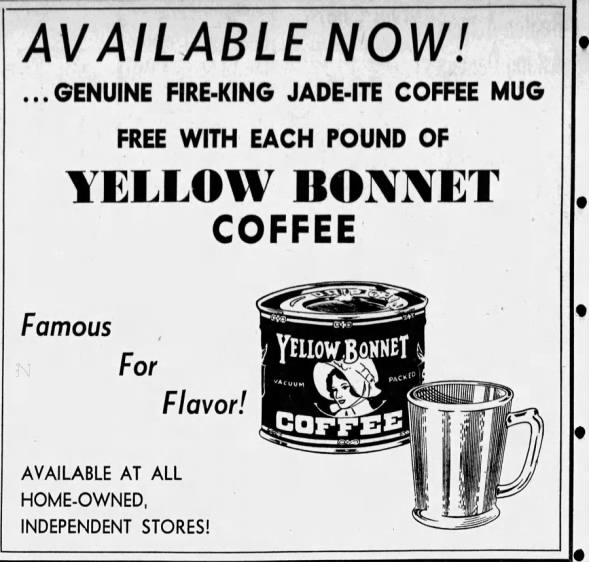 free jadeite coffee mug with each pound of yellow bonnet coffee 30 May 1952, Fri The Springfield News-Leader (Springfield, Missouri) Newspapers.com
Wetherill’s even gave away Jadeite batter bowls with any purchase from their paint department. 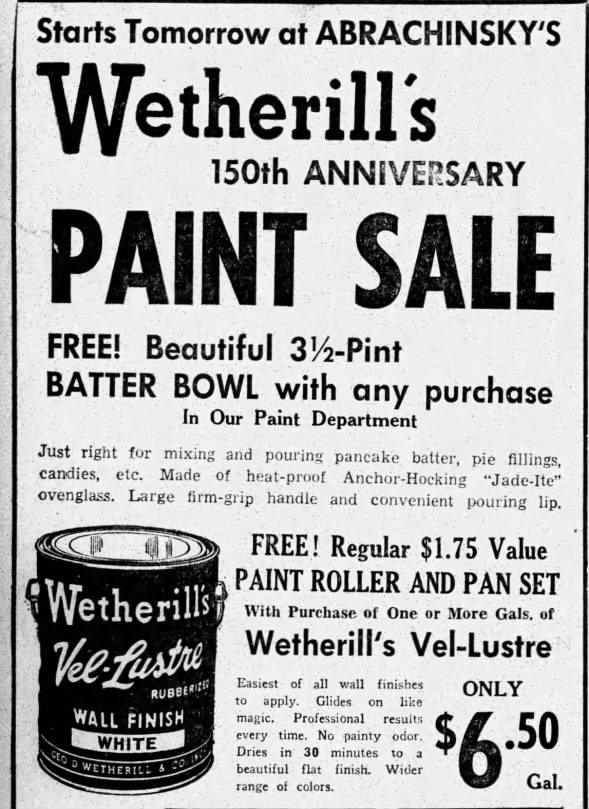 Giveaway – free jadeite batter bowl with any purchase in the PAINT department 01 May 1957, Wed Republican and Herald (Pottsville, Pennsylvania) Newspapers.com

Once upon a time, gas stations, grocery and department stores, Sears & Roebuck catalogs, and Woolworth’s all sold or featured promos for Jadeite dishes. 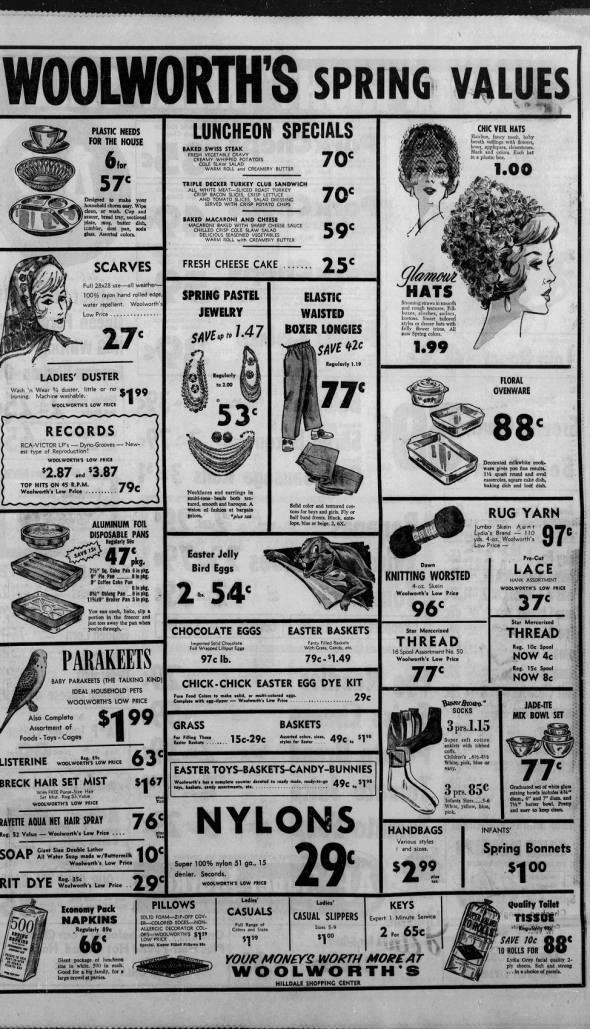 During the era of “five and dime” stores, there were several popular companies like Ben Franklin, McCrory’s, TG&Y, among a few others, but Woolworth’s was the trailblazer and originator of the five and dime concept – where everything was sold for five and ten cents.

Watch The Video: F.W. Woolworth – Life in America, the origins of the Woolworth company and its eventual demise.

I highly recommend Recollection Road’s YouTube channel for a walk down nostalgia avenue.  This channel is a virtual jackpot for anyone looking for a fun way to reconnect with their childhood roots and see all the favorite places from bygone eras.  Settle in with a snack, and perhaps a beverage of your choice for a relaxing time reminiscing and enjoying all the amazing vintage photographs.

Jadeite at the Woolworth’s Lunch Counter

Woolworth’s not only sold Jadeite in its stores but they also used it to serve food at their lunch counters!

Woolworth’s lunch counters proved to be very popular dining options in its time, and they were a successful part of the company’s history. 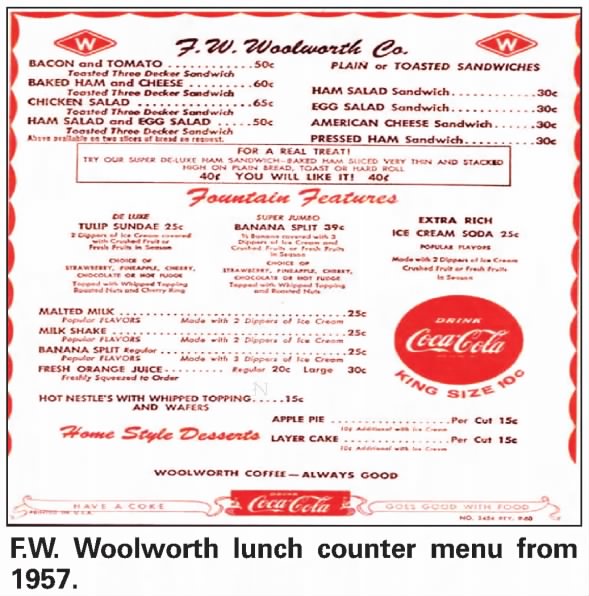 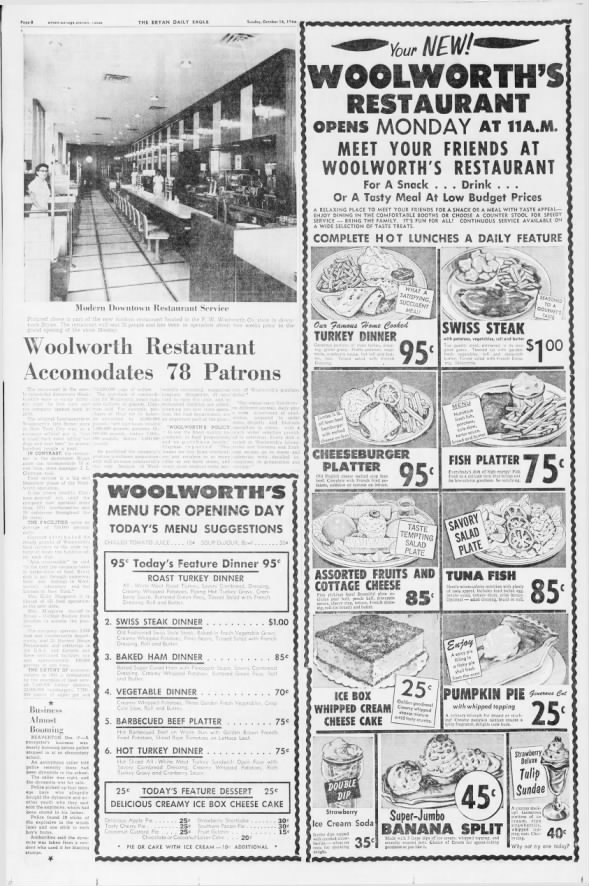 After shopping, hungry customers could visit the lunch counter to enjoy an affordable meal or just relax with a coffee and dessert before heading home.

One such dessert that is now a “famous” recipe is the Woolworth’s Ice Box Whipped Cream Cheese Cake.  This is a very light, fluffy, easy to make treat that is not too sweet nor too rich, and it was a huge favorite with many customers.  It’s also more calorie-wise than regular cheesecake because despite the name, the recipe doesn’t actually contain any whip cream.  Evaporated milk is used in place of whip cream for a more cost efficient and “five and dime” style dessert.

Jadeite used for this photo:

Here is the recipe for anyone wanting to try this long time customer favorite:

I totally see why this recipe was popular, and it’s a go-to dessert at my house.  It has a distinct cheesecake flavor, but not the same texture at all.  This dessert is very light, and has an almost mousse-like consistency.  So, it would be good after a heavy meal, as a summertime treat, or served with afternoon coffee.

It doesn’t have an overpowering lemon flavor either. For those who prefer more, adjust the lemon extract to your taste.

The real bonus in this recipe is how well the evaporated milk works in place of whipping cream.  There is no hint of evaporated milk taste and you don’t notice the jello either. I’ve always followed this recipe exactly as written, and it always turns out perfectly every time.

Chill the can of evaporated milk, mixing bowl, and beaters in the freezer for about 45 minutes to an hour before whipping.  If the milk isn’t almost starting to freeze, it won’t whip very well.